It's Hammertime Boys and Girls!

"Hammertime" is a set of multi-player rules for handling gatherings of our local group of Warhammer players. Since Warhammer is essentially a two-player game at heart (and doesn't scale to multiple teams well), the idea is to put down a basic set of guidelines for handling variable numbers of players, so that players can each know ahead of time what legal armies they can bring and how many points each team should field for the game. It also covers what missions players will be facing and other minor details in how the games will be handled.

Each player can bring whatever army they want to field, subject to the following provisions concerning Units, Factions, Sources, etc.

Each Team will have only one Warlord, chosen among the player armies on that team. This means only one Player's army will have a Warlord trait. The other players on the team may gain the benefit of that trait only if legally allowed based on their Ally status in the "Levels of Alliance" rules.

Each player may bring as many Detachments/Formations as their points limit will allow, subject to the following rules:

1 In the past, Tournament Coordinators have limited the number of "Sources" (i.e. Codexes, Supplements or Dataslates) to two per army. For our purposes, we're going to instead limit the number of Factions a Player's army can contain within the restrictions above. So a player could take Imperium of Man and Eldar, or Tau and Necron, but not Tau, Necron, and Eldar. As an example, they would still be unable to take more than one Ravenwing Assault Squadron (multiple copies of the same Formation) or two Necron Allied Detachments (per the Warhammer rulebook.)

2 For our purposes the Armies of The Imperium of Man are considered a single Faction when counting the total number of sources, but are considered separate factions with regard to Allied Detachments (based on the treatment of different Space Marine Chapters in the Space Marines Codex.) This allows the flexibility of including Imperial Knight, Assassin, Inquisition, or other "Secondary" units as Allied Detachments. "Tau Empire" and "Tau: Farsight Enclaves" are also considered the same faction. So, an Assassin Formation and an Imperial Knight Oathsworn Detachment could both be taken with a Space Marine Combined Arms Detachment (one Faction), but a Tau Hunter Contingent, Imperial Knight Oathsworn Detachment, and Eldar Wraithhost could not (three Factions.)

All units from all Players on a Team are considered to be part of that Team's Army, but they must also adhere to the rules in the Warhammer 40k rulebook for "Levels of Alliance." This means that Battle Brothers may benefit from another player's Warlord Trait, Allies of Convenience cannot have Independent Characters join other players' units, Desperate Allies must keep One Eye Open, etc. Refer to the section on "Allies" in the rulebook for further details.

Any player may forego forming Detachments/Formations and bring an "Unbound" list for play (as per the rules in "Choosing Your Army" for Unbound armies.) Every player's army on that Player's Team will be considered "Unbound" and will receive no Command Benefits from any Detachments or Formations they choose.

It is strongly encouraged that people commit to being available and choose their teammates and factions well in advance of game-day. This allows Players to prepare their army list ahead of time for the appropriate number of points they will need. In the event that people can't be sure they can show up, players will need to be prepared with multiple army lists to cover a range of point amounts and bring extra units that may not be used.

Also, it's possible that some players may not have enough points available with the army they want to play to make the minimum point total. If that's the case, those players can form their team ahead of time and the other player(s) can make up the deficit points from their own army list.

At the start of the game, each Team rolls off for their side. From here out, the team that wins this roll will be the Advantaged, the ones that lost the roll will be the Disadvantaged. Teams will flip back and forth for things like picking the type of mission or setting up objectives. The Advantaged will have the advantage in selecting the mission type, placing the first objective marker, and deciding deployment order. The Disadvantaged will get to place terrain first, and decide which side of the table they will use for deployment.

Missions will be randomly generated from the 12 missions available in the Warhammer 40k rulebook. Optionally, if people want to try out any of the scenarios included in any of the supplements or dataslates, they may skip this step entirely.

The Advantaged first decides whether the game will use the Eternal War or the Maelstrom of War missions, then rolls on the appropriate mission table to determine the result. The mission is then played using the details and rules from the rulebook. Determine the Randomized Deployment Zone at this time (i.e. whether the mission will use a Dawn of War, Hammer and Anvil, or Vanguard Strike deployment.)

After determining the mission, the Disadvantaged should begin the process of placing Terrain. Teams should alternate placing one piece of terrain at a time on the battlefield so that roughly 25% of the table has at least some piece of terrain on it. Additionally, one of the larger pieces of line-of-sight blocking terrain must be placed within 12" of the center of the table.

If the mission that was chosen uses Objective Markers, teams should now alternate placing these with the first being placed by the Advantaged. Objective Markers are placed using all the rules present in the rulebook, but additionally, no 2'x2' sixth of the table is allowed to have more than one marker. 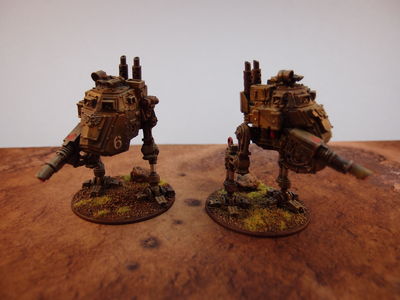